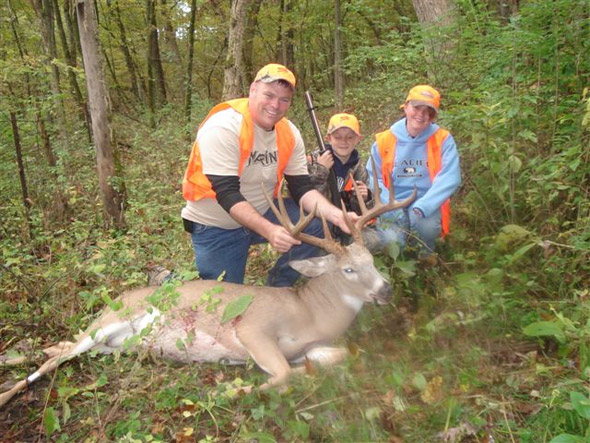 It was about 7:45 am on Saturday morning and the sun had started breaking through the trees. Garrett was busy checking out every squirrel and bird sound that he heard thinking it was a deer sneaking in on us. I explained to him that if a deer was going to sneak in, we would never hear it until it was under our stand and was the main reason we had to remain perfectly still. Having never hunted from a tree-stand before, he was having a hard time sitting still and kind of looked like a bobble-head figurine on everything that moved in the woods.

It was about that time, I saw a tail flicker about 55 yards down the ravine by a large Oak tree. I raised my binoculars to see a large body of a deer eating acorns. The neck and head were hidden by the tree, but it was a whitetail. I whispered to Garrett, "I see a deer." He answered in a rather load voice, "WHERE?" I gave him the stern "SHHHH" sign as I pointed at it while helping him raise the gun. 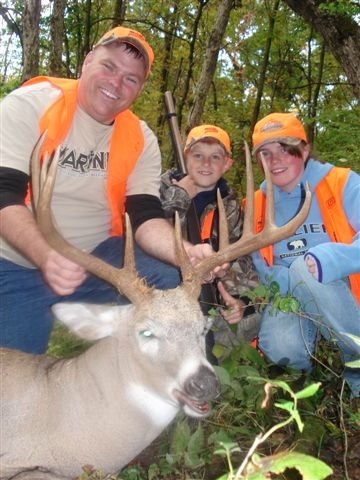 As he was leaning over me with the gun up on the shooting rail, I whispered in his ear reminding him to "aim carefully and slowly squeeze the trigger like at the range." "Let the gun go off on its own while you keep the cross hairs on the middle of the chest." After about 60 seconds, I started to think twice and whispered "shoot!" After what seemed like another 10 minutes, but more like 30 seconds, I whispered "shoot or it might walk away." 3 second after that, the air was filled with white smoke!

After a quick peek with my binoculars and seeing the white belly laying on the ground, I heard a large “I GOT IT!” I grabbed the muzzle loader, put the stock of the gun on the floor and started to dig in my back pack for the reload kit. About that time I hear a shout, “ITS A BUCK!” In disbelief, I took another look and after seeing the rack, I began digging frantically for the reload kit.

About that time I heard the worst phrase possible, “Hurry Dad, it is trying to get up.” Gator-aid, cookies, beef jerky, donuts and candy bars were flying everywhere at this point. And after nearly spilling the rest of our powder pellets, I was able to get the muzzle loader reloaded and ready for another shot.

However, I looked back up and the deer was gone. My heart sank as I asked Garrett, “Where did it go?” He stated, “I not sure, but I think I killed his back legs.” “Let’s go and see.”

I explained we need to give it some time. But after about 10 minutes and his constant urging, I too gave in and said it was OK to climb down. As I lowered him down by the safety harness, he looked up at me and stated “He is crawling away!” We had him! 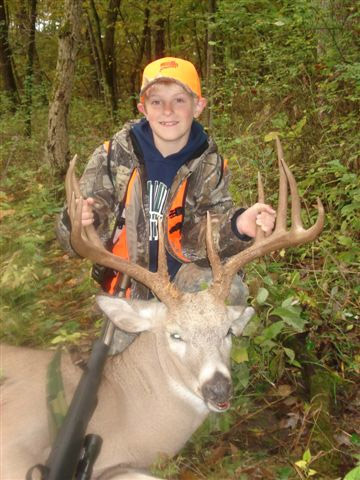 Once Garrett was on the ground, I nearly fireman poled that ladder. Using all the restraint I could to keep Garrett from running with a gun, we walked up to the buck to complete the harvest of his very first deer and possibly the buck of his lifetime.