An interesting event happened this past fall at the Camp Wilderness hunt and it bears sharing with the entire membership so that perhaps each one of us can understand better the meaning of the "UFFDA Spirit". Those of you that have been a part of UFFDA from the beginning know of what I speak. We have seen members come and members go and as you know, not everyone who comes to an UFFDA event gets it. Not everyone is able to grasp the importance and the profoundness of the "UFFDA Spirit". 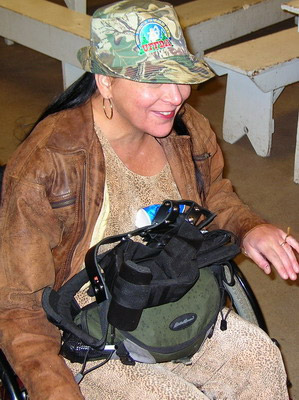 This was the first year as an UFFDA hunter for Michelle Frazier of Minnetonka, MN. Because of conflicting family schedules, Michelle and her husband left the hunt on Saturday evening. Much of Michelle’s free time at Camp Wilderness was spent taking photos with equipment that even to the eye of an amateur was obviously expensive of professional quality.

Michelle arrived home to discover that her camera bag with all of her equipment was missing. In a panic, she called the camp and asked the staff to search for her missing gear. We did, but to no avail. Her equipment was gone.

On Monday of the following week, I received a phone call at my desk in Glenwood. The caller identified himself as Chris Tabery of Osakis, MN. He asked me if I knew of anyone with the initials M. F. that has lost an expensive camera setup. I said that I certainly did and that she would be absolutely delighted to receive his call. After talking to him for a while, I gave him Michelle’s number and he called, made an appointment and delivered her camera to her in person. 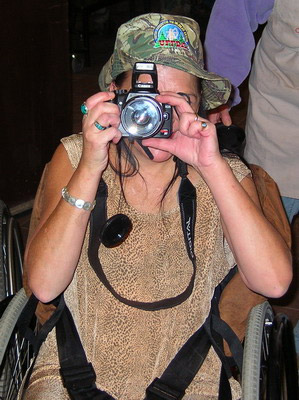 Now that is "UFFDA Spirit", right? A very sad story that ends happily for one of our disabled UFFDA members due to the kindness and considerate behavior of, in this case, a complete stranger. Well now, like Paul Harvey, Jr., I would like to tell you the "Rest of the Story".

The first thing that I asked Chris is how he got my number? He explained to me, much to my amazement, how he had done exactly that. Chris is a bowhunter (Yes, that’s right UFFDA gang, Chris is one of us! He is a bowhunter.) who grew up around the Wadena area where his family still resides. He had been up north doing a little bowhunting. As he walked out from his stand on Sunday morning he spied the camera bag, which he had missed going into his stand because it was too dark. He picked up the bag and opened it only to discover some top-shelf camera equipment. Being a bowhunter, his tracking task began. The only identification he could find in the entire bag were the initials M.F. so he turned on the camera and looked at the digital photos. In the small viewfinder he could only see that there were photos of scenery and what looked like a gathering of some kind, but he was unable to identify any of the people or the backgrounds in the photos.

Still knowing very little useful information, he headed home and pulled the photos up on his computer. There he was able to enlarge one enough to pull a UFFDA logo from one of the 2006 UFFDA boonie hats. From that, he ran a web search on the internet and discovered the UFFDA website, which not only had a matching logo of the one on the hat, but it also contained my telephone number. He called and the rest is history - or maybe not quite yet. 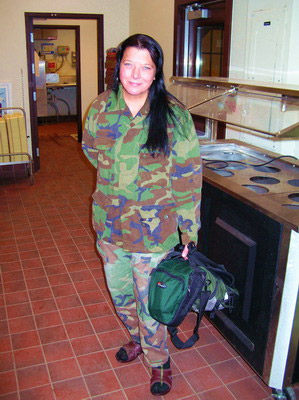 After a long and animated conversation during which I admitted that I would not want to be a wounded deer with Chris Tabery on my tail, I told him that UFFDA would love to present him with a year’s membership and invited him to become a part of our organization. I figure, like most of the rest of us do, that we can always use more people like Chris who is not only a bowhunter, but obviously honest, determined, thoughtful and also one heck of a tracker. He said that our mission sounds like something he would really enjoy and believe me when I say people, I hope and pray that Chris will be joining us in the Fall as this man obviously has what we refer to as the UFFDA Spirit.

Michelle and the entire UFFDA Family would like to you, Chris Tabery, for your fine ethics and for your incredible efforts to bring the lost camera home to its rightful owner. In a day and age that finds more people selfishly concerned with their own well being rather than those of their fellow man, it is very refreshing to discover a person that stands out among men. And I, for one, will not question providence when it drops a rare and valuable gem squarely into my lap. We will see you this fall Chris Tabery.

And may all of you in the UFFDA Family be truly filled with the "UFFDA Spirit".