Story and Photos by Terry Schrank 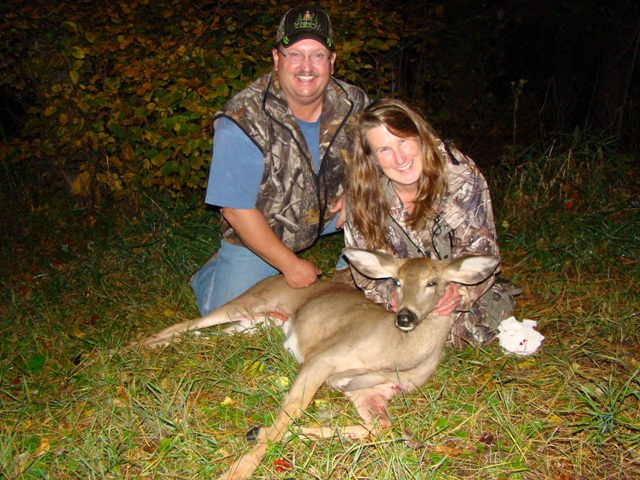 Thoughts of My Deer Linger On.

I enjoy the thrill of God’s forest intimacy – nature, up close and personal – by deer-hunting with a pen, camera and crossbow.  The quiet stillness while sitting in a blind or on a stand is sacred, allowing my pen to capture grace-filled moments describing the essence of my day in a Haiku, like the one above, celebrating my first crossbow hunt, seven years ago.  Creating these 17-syllable Japanese poems are challenging because I’m quite the “jibber-jabberer”!

Last year at the 2010 Camp Wilderness UFFDA hunt, I passed on many a deer, hoping to harvest “Maniac”, an awesome 12-pointer.  He never got closer than 100 yards from me; so in three days I never had a shot and finished up the hunt by going home venisonless.

This year’s hunt would be different: “If it’s brown, it’s down!”

Little did I know how different it would be.

On Day One, a young doe stepped into a clearing at the edge of a cornfield and stood broadside just twenty yards away.

At the click of the safety she wheeled toward me.  My Horton arrow flew, sticking into the dirt ten yards beyond the doe. 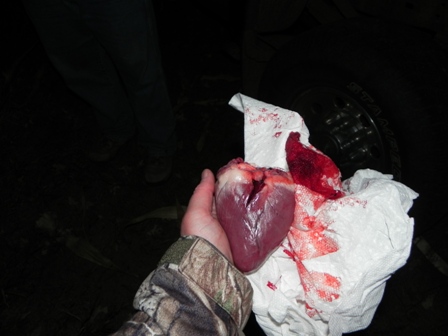 I wasn’t sure if I had hit her, so I reloaded and waited.

Soon another doe stepped into range.  She sniffed the spent arrow, looked at me and stomped.

Her attention quickly diverted to the corn field.

She perked her ears, blew, flagged her tail and bolted to the safety of the woods.

I wondered what frightened her; then couldn’t believe my eyes when out of forest of corn stalks a big black bear appeared.

He, too, sniffed the possibly bloodied arrow then raised his nose testing the wind.

Hmmm, maybe Blackie smells dinner.  Before I could finish that thought he raced towards me.

Yikes, maybe I am dinner!

As if in slow motion, I clicked the safety off and held my breath.

Knowing I only had seconds, I aimed and fired a shot – with my CAMERA! 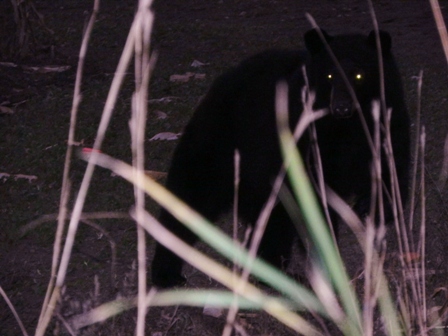 No effect, he charged onward.

“Quick,” an angel whispered, “use the flash!”

I did, stopping Blackie 10-feet from my nylon barrier.  Startled, he lifted one furry paw, then lumbered past me, trailing Fleetfoot.

Once the bear was out of sight, I gingerly stepped out of the blind, and Rambo-style, shouldered my crossbow screaming:  “You leave my deer alone!”

Shaken, I called my guide, Perry and he arrived with a friend and two rifles.  Tracking my doe wasn’t an issue, she dropped 35 yards behind my blind; and was untouched by the bear!

I checked her heart.  My broadhead pierced it, Cupid-like, finding her softball-sized sweet spot dead center.

I could “bearly” imagine such luck.

Blackie got lucky too; enjoying a late-night entrails dinner. 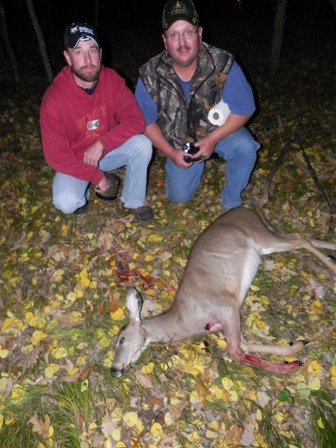 Got Him, Heartbreak Deer”